The hourly rate for the minimum wage depends on your age and whether you’re an apprentice. 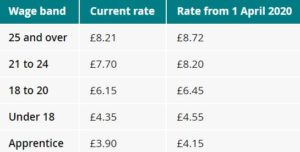 Anyone who is employed as an employee or worker must be paid the National Minimum Wage or National Living Wage. This applies whether you work full time or part time and also if you are an agency worker, an agricultural worker, working offshore or even a home worker. You can find out more about the types of workers that National Minimum Wage or National Living Wage must to paid to and check if you are getting paid correctly on the GOV.UK website and well as those types of work not covered such as self-employed workers, volunteers or if you live in your employers’ home.

Some parts of your pay do not count towards minimum wage, for example tips and gratuities or premium payments such as extra pay for working bank holidays or overtime.

What can be deducted from the minimum wage?

Your employer is allowed to make some deductions that could leave you with less than the National Minimum Wage or National Living Wage in your take home pay, for example tax and National Insurance contributions, but deductions for things like work related expenses such as tools and uniforms must not take you below minimum wage.

If you’re not getting paid the correct National Minimum Wage or National Living Wage rate, try resolving the issue with your employer first. There may have been a genuine mistake and an informal conversation could easily get the matter resolved. If you can’t get things resolved that way, then get some advice on the next steps you can take.

Acas have a team of helpline advisers who will explain possible next steps and the risks and benefits of each although they cannot tell you what to do, give legal advice or do calculations for you.

You can make a complaint to HMRC (HM Revenue & Customs) and complaints can be made anonymously. HMRC has the power to investigate complaints about minimum wage and can issue a notice for money owed to you. They can also fine employers and take them to court if they refuse to pay. The maximum fine for non-payment is £20,000 per worker. Employers who fail to pay can be named publicly and banned from being a company director for up to 15 years.

For more information head over the Government website where you will find more details of National Minimum Wage, Living Wage and what to do if you don’t think you are being paid the correct hourly wage.